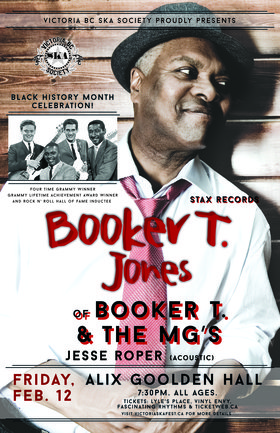 Fri. February 12th 2016 7:30pm @ Alix Goolden Performance Hall Victoria BC (All Ages)
$45+ (SOLD OUT)
Tickets at: Lyles Place, Vinyl Envy, Fascinating Rhythm, Ticketweb
Presented by: Victoria BC Ska and Reggae Society
Victoria BC Ska Society members, Board and staff are thrilled to have the opportunity to experience BOOKER T. JONES - an act that represents such an important part of soul music history past and present. Booker T. Jones' work with Booker T & the M.G'S backing seminal artists such as Otis Redding and Wilson Pickett who have influenced thousands of musicians and fans in the ska/rocksteady/reggae scene world-wide since the inception of ska and rocksteady genres in the early 1960s.

It can be argued that it was Booker T. Jones who set the cast for modern soul music and is largely responsible for its rise and enduring popularity. On classic Stax hits like “Green Onions,” “Hang ‘Em High,” “Time Is Tight,” and “Melting Pot” the Rock and Roll Hall of Fame inductee, Musicians Hall of Fame inductee and GRAMMY Lifetime Achievement Award recipient pushed the music’s boundaries, refined it to its essence and then injected it into the nation’s bloodstream.
While Booker T. Jones is most known for his lead role on the B3 organ in Booker T & the MGS he has continued to record with the whose who of contemporary soul, jazz, rock n' roll, hip hop and Latin based artists. In 2009 Booker T Jones was featured playing the B3 on Rancid's album Let the Dominoes Fall on the track "Up to No Good." In 2011 Booker T Jones recorded his ninth studio album titled The Road to Memphis on the ANTI record label. On the album he is backed by hip hop/jazz juggernauts The Roots. A fan favourite on the album played by Booker and the Roots is "Everything is Everything" written by Lauryn Hill. This album also features songs with Yimi Yames of My Morning Jacket; Matt Berninger of the National and Sharon Jones of Sharon Jones & the Dap Kings who sing a duet "Representing Memphis" and Lou Reed on the track "The Bronx."
His tenth and most recent album Sound the Alarm 2013 marked his much anticipated return to Stax Records. Sound the Alarm, finds the Hammond B3 organ master looking ahead yet again, laying down his distinctive bedrock grooves amid a succession of sparkling collaborations with some of contemporary R&B’s most gifted young voices.The album features guests appearances by Poncho Sanchez, Gary Clark Jr. Estelle, Anthony Hamilton and Vintage Trouble. 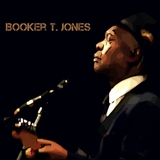 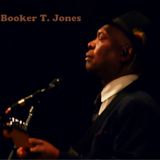 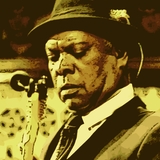 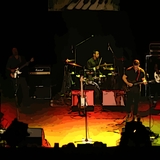